This is such great news to start off the New Year!!

According to a recent Daily Livestock Report, 2010 marked the fourth year in a row that meat consumption declined in the United States and the fifth decline within a six-year period. Now, a new report shows this trend is expected to continue in 2012. Although the biggest drop is expected for beef, poultry and pork consumption are also expected to decline dramatically. All of this despite the fact that the US population continues to grow.

And why not? It makes sense to eat a plant-based diet: it’s more economical, healthy, sustainable and compassionate!

If you’re looking to start off 2012 right with resolutions for healthier eating, visit us at One Veg World to try out our delicious vegan dishes. 🙂

To update our previous post from over a year ago, former President Bill Clinton made the full transition to veganism and cut out fish as well. No more consuming meat, dairy, or any other animal products for him. Bravo!

Before his lifestyle change, he had to undergo two heart procedures. Now, he’s lost over 20 pounds and says he feels great!

Hope he doesn’t take any more bites of turkey at Thanksgiving!  Of course, if he’s craving for his traditional holiday fare, he could always order the One Veg World Vegan Turkey with our vegan mushroom gravy. 😉

Wishing him a long life full of health and happiness!

PS: Remember, dear readers, you can win your own whole vegan turkey by visiting our restaurant and entering our holiday raffle anytime between now and December 22.

One Veg World was recently invited to cater for Animal Acres‘ Gala on September 11.

Chrissie Hynde: “I see the world in two categories: meat eaters and non-meat eaters. Meat eating is in the mode of darkness so it is characterized by ignorance…ignoring the source of what you are getting and where it came from in the first place.” “As human beings we are here to protect the defenseless and to be guardians of our environment.”

Mike Ness: “I love all animals. A cow or a pig or a chicken…these animals don’t have a voice. They can’t talk and say “I am suffering.” “I don’t see pigs or cows or these other animals as any different from a dog or a cat. I think they have just as much right to be on this earth as we do. That’s why I don’t eat them.” 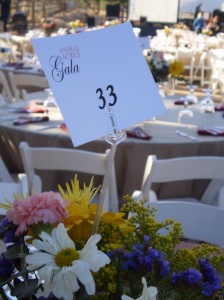 As for food, One Veg World served up an elegant gourmet vegan meal: 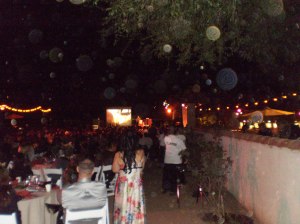 Tony Kanal: “I think there is a disconnect between what you are actually putting on your plate and where it came from and what this animal actually went through…a place like Animal Acres raises that awareness and it informs and educates people.”

It was great to meet so many like-minded people with kind hearts. Many of us also had a chance to meet up close and personal the farm’s resident cows, pigs, and turkeys. It was really cool! Looking into their eyes, you’re just melted by their love.

Thank you Animal Acres for having us and for all the wonderful work you do!

Wow! Former US President Bill Clinton is eating a primarily vegetarian diet (almost vegan!) to try and stay healthy for his future grandchildren! Watch the video.

He was encouraged by his daughter Chelsea, a vegan herself, to adopt the vegan diet to lose weight.

In the interview for Yahoo News and the Huffington Post, he said: “Since 1986, several hundred people who have tried essentially a plant-based diet, not ingesting any cholesterol from any source, has seen their bodies start to heal themselves — break up the arterial blockage, break up the calcium deposits around the heart. 82 percent of the people who have done this have had this result, so I want to see if I can be one of them.”

On Ellen’s show (btw, Ellen is a vegan herself) NY Time best selling author Jonathan Safran Foer answers audience questions on the myths of protein and why it’s important to give up eggs and milk. Jonathan also explains why our Thanksgiving table centerpiece should not be a turkey but of something that truly reflects our gratitude.  His new book Eating Animals explores the unappetizing truth about meat production and consumption and why he is raising his kids vegetarian. The book turned Natalie Portman vegan!